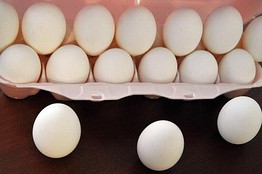 You might think that the two producers at the heart of the recall of more than half a billion eggs are tossing out fresh ones as fast as the hens can lay them. But as the Associated Press reports, the millions of eggs still being churned out by chickens at Wright County Egg and Hillandale Farms are destined for pasteurization facilities, where they’ll be turned into the liquid eggs sold in cartons or will be used in processed foods. Let’s be clear — these are not the same eggs that were recalled (those will be discarded), and these fresh eggs being diverted to so called “breaking plants” are being screened for possible salmonella contamination, CNN notes. And pasteurization would kill the bacteria in any case.

So, if you’re a consumer, will buying organic or farm stand eggs better protect you from salmonella? That’s unclear, says U.S. News & World Report. While being allowed to range freely improves a hen’s quality of life, “studies haven’t shown that well-treated hens are any less likely to carry and transmit salmonella to the eggs they lay,” reports USNWR, citing a Cornell food microbiologist. In fact, those hens may pick up bacteria or chemicals from the dust and soil they peck at, USNWR says.

Wright County Egg was identified by public health officials as a possible source of salmonella-contaminated eggs “at least two weeks” before the Aug. 13 recall, reports USA Today. The CDC waited to issue even a general public warning about the dangers of undercooked eggs until the FDA had fully sussed out the situation, the paper reports. An FDA official tells USA Today the agency needed time to verify the source of the outbreak before contacting the producer.

Meantime, the Washington Post continues its coverage of the history of the producers involved in the recall, reporting that the farmer who owns Wright County Egg once sued the state of Maryland for trying to close a facility that sold possibly contaminated eggs across state lines. He won his case, which argued the state had no power to regulate the sale of eggs not sold in Maryland, the paper says. The story illustrates the problems with the patchwork of authorities and laws overseeing food safety, the WP writes.

The FDA has a list of affected brands of recalled eggs.

Buy As Few As 3 Chicks